Hi everyone. As I had noted previously, I was in many ways somewhat beat about politics back home, hence why some of you may not have heard too much from me on your sites, even though in my absence you all have persevered and appear to be making something of a splash in general as noted over on Mick’s site (that is the number of Nationalist bloggers that appear to be proliferating). I had come up on something of a writer’s block in relation to politics, but then again I normally do at this time of year and come September I am usually back on the wagon so to speak. Well, never fear because my friend Cleenish has been in contact and forwarded a number of essays that I hope will start something of a conversation on Irish Nationalism among us all much like he did previously here and here. In many ways, it has got me out of my block and I hope to be writing something of my own in the coming days. In the meantime, I hope you enjoy his first piece with a few more to come and as always, if you would like to contribute something please either email me at footballcliches1@gmail.com or send me a tweet at @footballcliche1 and we can take it from there.

Irish nationalism is currently in a state of agitated flux. The sounds of angry retorts surround the debacle & furor on SPAD Bill, victims and the past. The trumpeting of the newly identified Northern Irish Catholics and their emerging attachment to the UK and ‘our own wee country’.

So is Irish Nationalism a spent force and concept? Left increasingly high and dry by the tide of change?

Can any party raise their eyes from the fray of political battle to look beyond the GFA and lead us towards a new horizon?

A horizon that offers a new vision, new challenges and exploits new opportunities.

I feel that we need to raise our eyes above the current political controversies, the problems of the GFA and the holy grail of liberal unionism to find a marketable vehicle to entice nice UK-friendly Catholics to vote for a unionist party, anyone tempted by NI21 😉

We need to review and assess the landscape unfolding before us, to consider both the emerging trends and the future strategic direction for Irish nationalism and what the parties can offer. The two are irrevocably linked.

We have become accustomed to the slow tectonic struggle between Unionism and Nationalism, to the sterile and often juvenile ‘debates’ between, and within, both isms and the near inviolability of the Northern Ireland construct. We all know the unwritten rules of the game being played; elections in the golden ‘wee country’ have always been elections within elections for the leadership of unionism and nationalism respectively. The tectonic movement of the two monoliths pored over for signs of the demographics moving towards a 50:50 society and/or the holy grail of a nationalist majority, all measured in decades.

The groundhog arguments, sentiments and attitudes repeated down the generations, change slow and painfully slow at times. It’s weirdly comfortable after a fashion – which is a troubling thought in itself.

Do you sense that we are beginning to enter unchartered waters; with rising catholic numbers, with what seems to be an increasingly fluidity on multiple identities the effects of immigration and mass emigration again affecting our young people? We may be entering a period of fundamental change, a change that may in part be exercising and recognised by Unionists and by NIO/English, and who may be attempting to shape that change.

The slow tectonic shift in numbers may be the source of the British/NIO encouraged letsgetalongerist alliance, where a competing vision of ‘a new NI, a NI as a shared nation within the UK’ aims to ensure stability. Britain’s own let sleeping dogs lie strategy that will only change if & when Britain recognises that change is inevitable. We Irish will have to contend with an England that increasingly looks self-absorbed where the Irish (of all hues) are regarded just as a pesky, annoying problem!

The dreary steeples of Fermanagh and Tyrone may be submerged once again in passivity or  changed by the tides of history about to break over them and once they inevitably arise again, will they be green tinged or orange tinged?

We may therefore be on the cusp of interesting times for Irish Nationalism; where the old certainties are lessening their grip and where the future is more fluid. The next 10 to 15 years could in future years be seen as a watershed period, a period that shaped the future ancient quarrel of the Irish people for a number of generations to come.

Change brings many, many questions, new challenges and risks, and most importantly new opportunities – if we can but recognise them and act on them.

How our political parties face these challenges is crucial, our expectations should be high; on leadership, on shaping the future and on creating a new vision for the future for our nation. Will they be a generation of nation builders or managers of a continued low level conflict within a connived British construct?

We need our political parties to develop a pragmatic strategy to achieve their vision, the ability to forge relationships and common purpose with others, and pragmatic plans for a re-awakening of the national Irish consciousness and the re-integration of Ireland. Will Irish Nationalism be able to present a new vision for Ireland that resonates and accommodates all of our peoples?

The question of the SDLP, its purpose and existence as a significant political force has come under particular scrutiny and has been the subject of much debate recently. The inept handling, positioning and lack of forward thinking by the SDLP has exposed deep weaknesses in the party and how it conducts itself. (although tempting, I will refrain from kicking that particular dog, as I like dogs ;))

Prior to this there have been a number of blogs which questioned their direction and indeed the need for the party itself; by FC and also by Seamus. The SDLP itself may be entering a watershed period on its ability to shape the future of Irish nationalism and by extension Ireland.

In any discussion on party politics you really have to preface it with a basic statement on your own leanings. I am an avowed political party agnostic, I’ll happily vote, and transfer my vote, to the party that provides Irish nationalism and the Irish nationalist community with leadership and which best represents our interests. I am left leaning and believe we have a responsibility to act together for the common good.  I am socially liberal, with a tolerant and ‘live and let live’ attitude. Doesn’t that sound suspiciously like a prayer.

The starting point is to outline what appears to be each parties strategy and approach on the ‘Irish Question’ and the leadership they provide. I have no inside knowledge whatsoever, so it’s essentially what can be gleaned from what’s out in the public domain. Given such circumstantial evidence, my take may be a rather shaky house of cards!

For me the most important aspect in any such a exercise is to keep at the forefront of our minds the primary purpose of any nationalist / republican party, that of building a new Irish nation. An Irish nation that reflects our diversity, is at ease with itself and confident to express all identities within our nation.

As individuals, and collectively as a people, I feel we need to consider for ourselves whether we ourselves are capable of rising to the challenges of the future. It is not all about the parties. 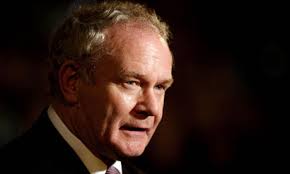 being the generation of nation builders who can conceive, innovate and deliver an Irish nation at peace & reflective of all identities, including its British strand?

I think we have the grit, imagination and ability to transcend the current thinking and to create Ireland anew.

It is now time that we recognised that politics has moved to a post GFA environment, and that we should be raising our eyes towards the horizon and the task ahead. We can and must create a vision for Ireland that can engender a new sense of pride and of belonging, which can enthuse our people and produce a credible, pragmatic strategy to achieve it

Can any of the political parties meet the challenges of changing times and produce a new inclusive blueprint for the Irish nation? The catholic, inward, repressive and mono-culture Ireland is no longer an option. What vision now best represents and reflects our people?

I hope to put up, with FC’s indulgence (FC – you got it!), later posts to critique each party in respect of their strategy and to address some the questions I’ve raised. It is not for me to give definitive answers, who am I after all, but rather in a small way to help encourage a wider thinking and discussion.